x You have added Encores ~ LP x1 180g to your shopping cart! 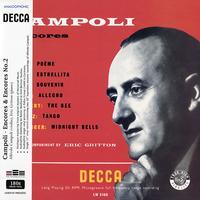 Mastered from the original masters of Universal Music

Violinist Alfredo Campoli is accompanied by Eric Gritton for this recording of Encores by Schubert, Albeniz, Mendelssohn, Elgar, Debussy and more.

"A succession of encore pieces, all played with the utmost enchantment; and with the three more sentimental show-stoppers isolated on side one — so that we have no need to break the mood unless we wish. In search of more athletic achievement, we can turn over; here I think perhaps the Albeniz Tango might have been a little less athletic, a little more sentimental (and how on earth does it take two people to arrange the Fiocco piece? — the credit reads almost like one of those committees that write the not-so-good pop songs).

"But the search for athleticism is rewarded so fully in "The Bee," and for sentiment so fully in the Fibich, Ponce, and Drdla: this is indubitably how to play encores. And, bar a surely unnecessary tape-join in the Fibich, how to record them — a winning sound; and a sensible disposition of the whole on a medium-play. (for Vol.1)

"He combines a knowledge of such pieces with a matured classical technique as does no other violinist I can think of, and he plays the music with sympathy and affection and immense skill. The Drdla sounds quite ravishingly beautiful... and the recording is very good indeed. (for Vol..2)" — Gramophone