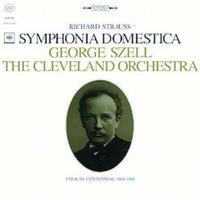 Convinced of his own historical importance, Richard Strauss introduced himself to American soldiers as the "Composer of the Rosenkavalier" when they knocked on the door of his villa in Garmisch-Partenkirchen at the end of the Second World War. Already more than 40 years earlier, Strauss considered himself as interesting as Napoleon and Alexander the Great and defended his egocentric Opus 40 ("Ein Heldenleben") by saying that he didn't see why he shouldn't write a symphony about himself. The "Symphonia Domestica," op. 53 is a musical tribute to family life in the living room, at the dining table and in the bedroom, in which Strauss expresses in a strikingly lyrical tone.

George Szell and the Cleveland Orchestra conjure up a picture of a happy family life, and the harmonious relationship between father, mother and son, which is sometimes filled with' joie de vivre', gallantry, jubilation but also sometimes filled with disputes. Looking more closely at Strauss and his "Symphonia Domestica," listeners will find — alongside a familiar late-romantic musical language — clear echoes of his unique personal style. Wide intervals, a bold and vivacious treatment of the themes, surprising harmonic changes and not least exuberant melodiousness are unmistakable characteristics of this exhilarating music, which reflects the colossal ego of its composer.

This Speakers Corner LP was remastered using pure analogue components only, from the master tapes through to the cutting head. All royalties and mechanical rights have been paid.